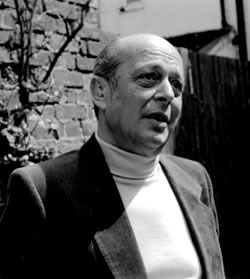 Ivan V. Lalic
1
Autumn like a slap in the face, on the threshold of September
In Aquileia: the wipers peel the rain
And the squashed insects from the windscreen,
we slow down,


So that is the town, that stone axis in the plain
Between the black cypresses creaking in the wind
Like the beams of a ship;
and the gnawed bones
Of a jetty drowned in the wet grass,
Rain-sprinkled grasshoppers, a few wild flowers,
The mosaic floor of yesterday's summer buried in ozone
Beneath the fallen vault of lightning; so we must
Take their word for it: the signs mentioned
In the guidebook, the fragments, and the darkness
Beneath our feet, and the red parasol before the café
Heavy with rain as Attila's tent
Three days before the slaughter, this is Aquileia--
This healed scar
And this name, a dried pericardium, silence
On which history floats like oil on water;
On our return, the quarter of sky to the west
Shines the colour of ice, of blue flame--
The screen switched on, but no picture.

2
Water is only a swifter image of earth,
Her sister in a different duration; hence
The founder of the city, ploughing the furrow
For the solemn sowing of squares and towers, resembles
The boatman ploughing the water with his wooden bow,
Five miles an hour, and the furrow after his stern
Is overgrown in white weeds of foam;
the difference,


The most obvious, is in the speed
With which the scar heals over; it is in time,
And so conditional; and yet, if I understand water,
For I know the reason for her innocence,
I do not understand earth, her work, the stubborn wrath
Eating the letters from the stone, felling
Any peaks rising over her own slow grave,
Overturning the tombstone with a lime tree's root, wishing
To wipe the imprint of a long love, on her only bed--
When did the feud begin? And why?
We collect consequences as the breeze
Collects poppies along the road;
the storm thickens,
'Weathercocks rattle in the wind';
but
The direction of the movement quarrels with its speed.

3
A trained eye may recognise the unhealed humus,
The traces of ramparts in this dusty Arcadia of tobacco
And vine;


from the shadow of the hill
The Acropolis has peeled like a scab;
the voice of a cricket


Like barbed wire in the stunted fig tree--
Heracleia, in her horizontal darkness
Dug four-square at the foot of the hill:
In the shallow pit a small field of stone stubble,
Two lines of Hesiod mutilated like statues
And the midday sun oblique over the orchard of paradise
Conceived with the aid of tesserae on the floor
Of a church since faded away;
cedar and sweet cherry,


And pomegranate, fruits which the beaks of flame
Did not peck away in the darkness. And why?
Is there a choice, is there an order
In the long migration of landscape into landscape, wall
Into emptiness, emptiness into tree, into shadow,
Shadow into hope, hope into wall? One thing is certain,
There is no pure future: space stays infected
With the fever of signs, the germ of remembering--
And a mother's kiss
Transmits the blessed disease.

4
The blind eat oblivion with their bread, dreaming
Of a vacated future, swept clean like a room
Before the arrival of a new lodger;
the rose of rust


Is already sown into the steel girder which hovers
Over the building site, rain sketches a garden
And a network of streets in the desert, the rubbish heap
Moves down the river, the temple up the slope, the highway slips
Beneath the earth like a snake—movements are linked,
The word future only designates the unfinished;
But terrible is the effort to recognise love
In the waning, and to read the sign
In the nettle between two syllables of stone, in the wound
Healing swifter than the telling--
There is resistance from the beginning, the earth trembles
In the sweat of dew, in effort, in light:
He who wrestled with an angel performed
History in one night;
our task
Is to remember, to deliver blows;
The task of the peach is to blossom.

[Note: Mnemosyne was both the Greek goddess of memory
and the mother of the muses.]